A better understanding of how chronic inflammation drives lung cancer 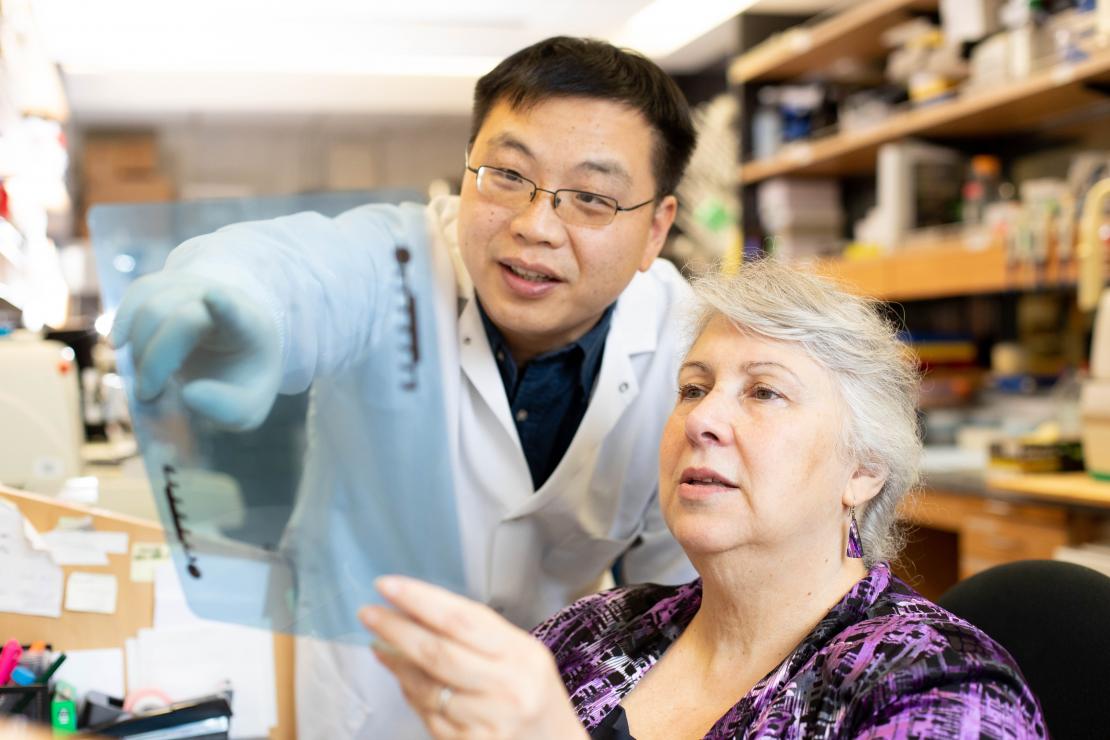 Inflammation coaxes lung epithelial cells to be replaced by those more commonly seen in other organs - a clinically relevant event that can be studied using accurate in vitro models of the human lung.

In response to our "Cancer Causes" challenge, one Cancer Grand Challenges team is deepening our understanding of how chronic inflammation drives cancer.

When Terry Kavanagh from Liverpool, UK, learnt he had lung cancer, his doctor dealt him the devastating blow that he was unlikely to survive longer than three months. “But I never read the script,” says Terry. “And those three months have now turned into nearly 33 years.” Surgeons removed half of Terry’s left lung; after which he made a full recovery – a result he considers “a miracle”. Terry, a member of the Cancer Grand Challenges Advocacy Panel, knows that not everyone who is diagnosed with lung cancer will have the same outcome – around the world, the disease claims more lives than any other type of cancer.

At the University of California, San Francisco, pathology expert Professor Thea Tlsty investigates what makes some of the cancers with poorest survival, such as lung cancer, so aggressive. She believes the explanation is connected to a discovery made over 150 years ago when scientists first looked at cancer cells under a microscope.

“There were immune cells crawling all over them,” Thea describes. It was the first hint that inflammation – the immune system’s normal way of responding to injury and threats like bacteria and toxins – was linked to cancer. We now know that the risk of certain cancers increases when the tightly regulated process of inflammation starts to spiral out of control and becomes chronic. “Sadly, people with cancers driven by chronic inflammation often experience the poorest outcomes,” says Thea. “These are people for whom we hope to make the biggest difference.”

Up to 25% of cancer deaths are associated with chronic inflammation, representing around two million people around the world, each year. But what has left scientists stumped is how inflammation coaxes healthy cells to become cancerous. In response to the Cancer Causes Cancer Grand Challenge, STORMing Cancer, Thea’s team of 60+ researchers spread across 3 continents, was awarded £20m to figure out once and for all why chronic inflammation drives certain types of cancer – and whether this transition can be halted or even reversed.

Lessons from the oesophagus

The “poster child” for chronic inflammation in cancer is oesophageal adenocarcinoma, Thea reveals. It often starts with acid reflux, an incredibly common condition not usually associated with dangerous complications.

But up to 15% of people with acid reflux go on to develop an inflammatory condition called Barrett’s oesophagus. Here, the flat squamous cells lining the food pipe are replaced by column-shaped cells, more like those found in the stomach and intestines. This biological phenomenon, called metaplasia, puts a person at a higher risk of their cells growing abnormally, called dysplasia. “This is a protective event, an adaptive response that the body mounts to try and protect itself,” says Thea. “Only rarely does it lead to cancer”. Nevertheless, between three and 13 people out of 100 with Barrett’s oesophagus will develop oesophageal adenocarcinoma in their lifetime.

Studying how chronic inflammation contributes to cancer from the beginning of the process, before cells are even pre-cancerous, is therefore just as important as understanding the disease’s final stages, reasons the STORMing Cancer team. The researchers want to know if tissue transitions like those that take Barrett’s oesophagus to oesophageal adenocarcinoma also occur in other chronic inflammation-associated cancers – with particular focus on cancers of the lung, colon and stomach.

Secrets of the stroma

While many studies investigating chronic inflammation in cancer focus on the tumour cells themselves, the STORMing Cancer team is taking a different route – looking to the connective tissue (known as the stroma) that surrounds all our organs. Thea’s earlier experiments on breast and prostate tissue suggest that the stroma has a powerful influence over epithelial cells, potentially providing the environment that coaxes healthy cells to progress through metaplasia, to dysplasia, and eventually form a tumour.

This conversation between the stroma and epithelium might be a crucially overlooked factor for elucidating one of the biggest riddles in cancer biology.

Dr Deng Pan, a Professional Researcher in Thea’s lab, studies squamous cell lung carcinoma (SCC). Accounting for around a third of all lung cancers, SCC forms in the epithelial cells that line the lungs’ airways. “We’re interested in studying how inflammation and other forms of damage, especially from smoking or certain pollutants, can cause an apparent change in healthy lung tissues,” says Deng.

Exploring the interactions between the epithelial cells and the stromal cells beneath them is key to his research – but a major obstacle is the lack of lab-based models that accurately mimic human biology. In the bronchioles of the lung, for example, epithelial cells are fringed with cilia – projections that wave microbes and debris out of the airways. Most models are unable to achieve this intricacy.

To address this challenge, Deng has optimised a model that impressively recapitulates bronchiole structure and behaviour, complete with cilia that wave like those in the body. His creative solution involves a two-sided well called an air-liquid interface, filled with lung cells from human donors. Stromal cells line the bottom of the well, while bronchiole epithelial cells are placed on top. The different cells are separated by a partially permeable membrane to allows signalling factors and other molecules to pass through.

Deng’s model is the first time scientists have been able to pair healthy lung epithelial cells with inflamed stromal cells from people with lung cancer. And the early results are intriguing. Deng witnesses a curious transformation not unlike the metaplasia seen in Barrett’s oesophagus.

Surprisingly, the lung cells that were once fringed with cilia are replaced by cells that resemble cells more commonly seen in the oesophagus, skin or cervix. When the same cells are paired with non-cancerous stromal cells, they do not go through this process of metaplasia. Deng’s findings provide more evidence that the stroma plays a role in inflammation-induced lung cancers.

A possible explanation is that this metaplasia is intended to be protective. In response to inflammation, the stroma produces signalling molecules (such as epidermal growth factor, EGF), telling epithelial stem cells to create cell types that protect against further damage. But this protective mechanism is error-prone and increases the risk of cancer.

Deng is now studying whether adding chemical agents of inflammation (such as those found in cigarette smoke) to the model system can trigger metaplastic cells to become dysplastic and, eventually, cancerous. This information would provide greater clarity on the precise cellular journey that leads to cancer – and, ultimately, how scientists might be able to intervene.

Could personal protection be down to genes?

Figuring out whether this disparity is genetic will be an important step in understanding how chronic inflammation drives cancer. “We want to identify what makes one person’s stroma really good at steering the transformation from a healthy state to a cancerous one,” says Thea. “Then, we can start developing agents which can stop or even reverse the process for clinical benefit.”

For some people with certain types of lung cancer, the dawn of immunotherapies in recent years has begun to improve survival. But there is still an urgent need to find better therapies for the disease that kills nearly 1.8 million people each year globally. Thea, Deng and the STORMing Cancer team’s research suggests that interfering with the conversation between epithelial and stromal cells, rather than directly targeting the tumour itself, could be a promising approach.

The team’s ultimate hope is that by unravelling the mystery of chronic inflammation, we could prevent up to one in four cancer deaths. And that one day, Terry’s story will no longer seem so remarkable.

Find out more about the Cancer Causes challenge.