Cindy Sears: the power of preclinical models and learnings from global health 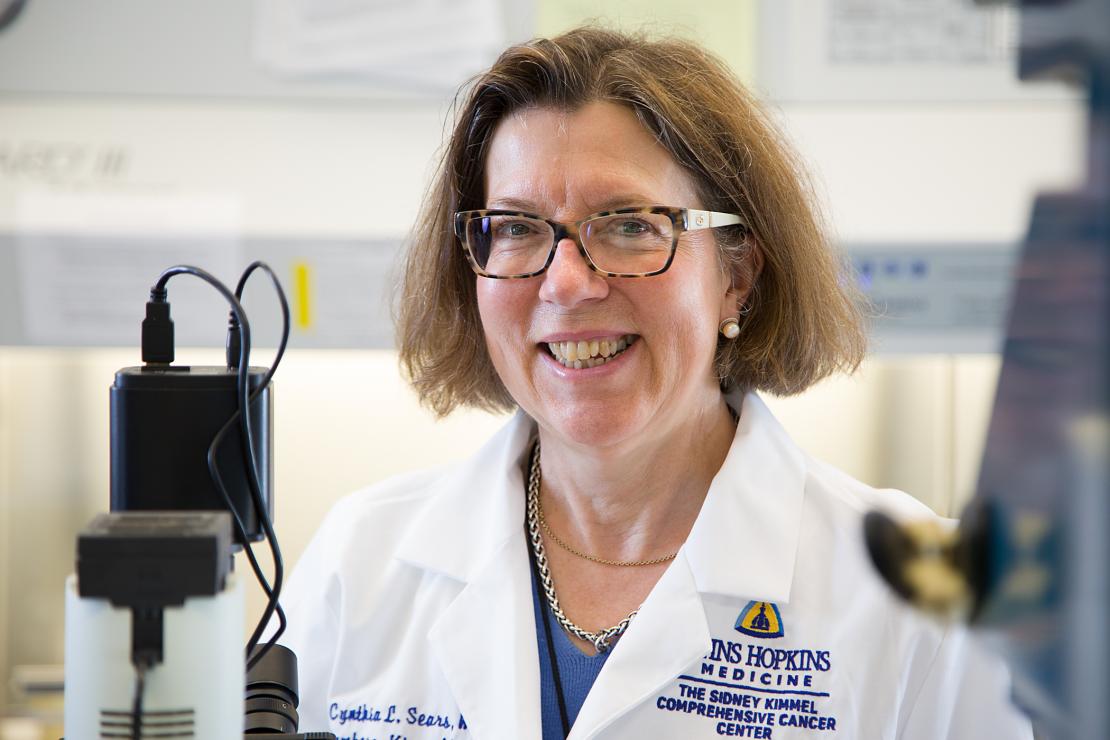 OPTIMISTICC’s Cindy Sears is a clinician scientist at Johns Hopkins University School of Medicine and an expert in infectious disease and colorectal cancer.

In July, Cindy and the team shared a new mouse model which both mimics human biology with impressive accuracy and sheds light on immunotherapy resistance. Here, she discusses the significance of the findings and what drew her to work in the microbiome field.

I started my medical career in global health, working as an internal medicine resident at Khao-I-Dang, a refugee camp outside Aranyaprathet, eastern Thailand. We were working predominantly with Cambodian refugees who were suffering from various infectious diseases, including vaccine-preventable illnesses, because Pol Pot had halted vaccination programs.

We saw outbreaks of common infections with devastating effects and I witnessed my first case of cholera, at about 3 in the morning while on call overnight. This poor individual was in a packed room, and I had to do the best I could to stop the potential transmission in our little facility. Profoundly influenced by that experience, I decided to specialize in food-borne and enteric infectious disease.

From here, I never really expected to transition into oncology!

But when I joined the faculty at Johns Hopkins, we began investigating enterotoxigenic Bacteroides fragilis (ETBF), which can secrete the Bacteroides fragilis toxin (BFT) and cause diarrheal diseases. We realized the story is much broader than originally thought, with the toxin contributing to colitis and colorectal cancer in mice. After identifying a tumor phenotype, we showed that BFT contributes to these diseases through the activation of Wnt signaling pathways and coordination of pro-carcinogenic inflammatory cascades, facilitated by IL-17.

Coming together with colleagues across different fields – infectious disease, oncology, inflammatory bowel disease – we revealed the relationship between ETBF and cancer and then further drove our understanding of it. And I’ve kind of been in colorectal cancer research mode ever since.

The power of accurate preclinical models

Colorectal cancer is a burning issue. We’re seeing a global rise in cases – in Asia, in Africa, here in America – including in early onset disease. These latter individuals are diagnosed young, often at a late stage, and the loss of life in those so young is awful. My experience in low-resource medical settings motivates me to find a way to identify those at higher risk, with less expense and invasion than current infrastructure allows.

This is what drew me to work with the Cancer Grand Challenges OPTIMISTICC team, which explores the role of the microbiome, including microbes like ETBF, in colorectal cancer.

In July, with colleagues in the wider research community, we used a novel murine model to provide new insight into the relationship between ETBF, genetics and cancer development. We’d previously demonstrated how ETBF can trigger Wnt- and IL17-dependent tumorigenesis in the distal colon, using the multiple intestinal (Min) mouse model, which is deficient in the tumor suppressor Apc.

But while murine models are incredibly useful, human cancer is vastly more complex. To the Min mouse, we added the BRAF-V600E mutation – a common mutation that can drive colorectal cancer in humans via the MAPK pathway, often resulting in metastatic disease which is notoriously difficult to treat.

Astonishingly, the addition of this single mutation dramatically modifies the biology of these organisms. The combination of these genetic changes, when exposed to ETBF, causes myeloid cells to be more pro-carcinogenic and induces changes to tissue structure, to the immune response, to hypermethylation, to the mucus membrane – resulting in a phenotype that much more closely resembles BRAF-V600E tumors in people.

With greater recapitulation of human disease, the model will enable us to delve much deeper into biology, which may identify new targets for BRAF-V600E-driven cancer.

A second important thing we’ve learned from this model is how the addition of BRAF-V600E, combined with exposure to ETBF, triggers a much stronger response to immunotherapy.

We know immunotherapy as one of the greatest recent advances in cancer treatment, with remarkable results for a very small subset of patients with colorectal cancer. A major driver of resistance versus response is microsatellite instability – a predisposition to mutations, due to impaired DNA mismatch repair. Microsatellite-instable tumors generally respond quite well to checkpoint inhibitor immunotherapy, probably due to a high mutational burden, while only very small numbers of people with microsatellite-stable tumors respond well to these treatments.

The reasons why aren’t yet fully fleshed out. But in this new murine model, we’ve shown that exposure to ETBF induces microsatellite-stable tumors to become sensitive to immunotherapy.

Now – nobody’s going to be excited about giving ETBF to a patient. It promotes immunotherapy while making the disease worse. What our findings provide are proof of principle, and direct evidence that interactions between the microbiome and host genetics play a role in pathogenesis and treatment resistance. If we could figure out the underlying mechanisms, perhaps using our new model and others that more accurately mimic our biology, we may find a way to make patients’ tumors more susceptible to immunotherapy – solving a central challenge in colorectal cancer treatment.

Colorectal cancer is a burning issue.

But, as I felt when we first started exploring ETBF’s association with cancer, I’m optimistic that we’re moving in the right direction for our patients, making greater progress by uniting different disciplines, perspectives and experiences. Like in any part of life, diversity and collaboration in science enhances creativity and productivity, sparking ideas we’d never have had working alone. This is facilitated by the wonderful network here in the OPTIMISTICC team and the wider Cancer Grand Challenges community.

Read the paper in Cancer Discovery.

Learn more about the OPTIMISTICC team.