Matrix remodelling in the transformation from inflammation to malignancy 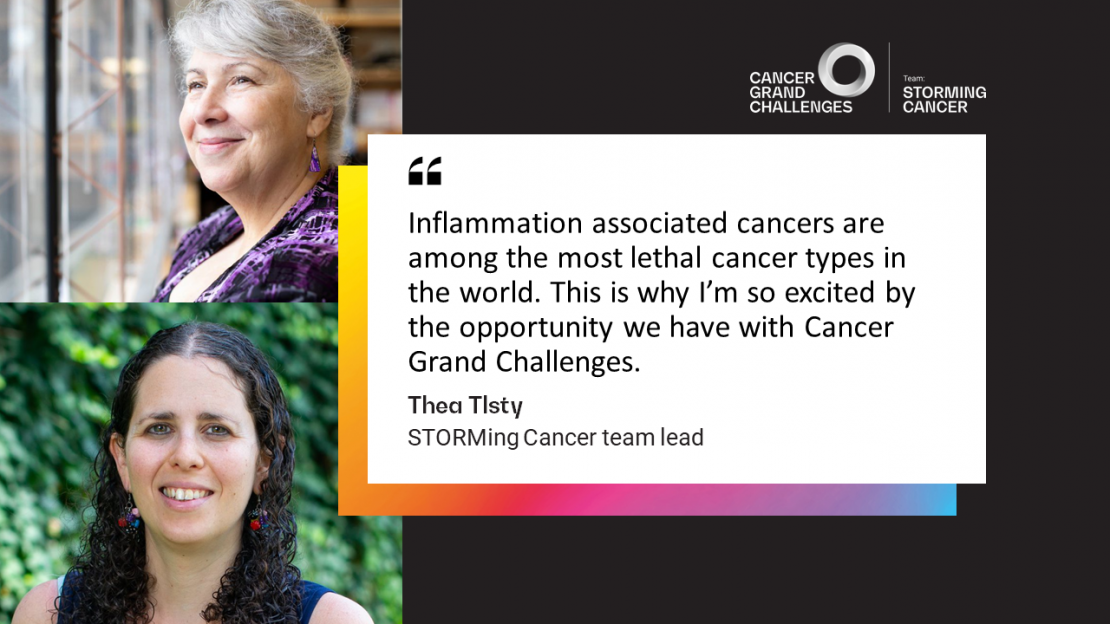 Chronic inflammation is directly linked to up to 25% of cancer deaths worldwide. Could reprogramming of the inflamed microenvironment prevent, slow or even revert the cascade of inflammation to malignancy?

Certain factors – such as obesity, physical inactivity and chronic inflammation – are strongly associated with increased cancer incidence, but the underlying mechanisms remain to be clearly defined. For example, inflammation is usually a finely orchestrated reaction driving tissue repair after injury, but when it becomes chronic, it has long been known to create an environment conducive to many diseases, including cancer. Elucidating the mechanisms underlying this complex association would reveal precisely how inflammation influences disease development and recurrence. More importantly, this understanding could lead to new and improved approaches to prevent and treat inflammation-associated cancers, which are particularly lethal.

The Cancer Grand Challenges STORMing Cancer team aims to solve this longstanding mystery by focusing on an overlooked aspect of chronic-inflammation-associated cancers (CIACs): how inflammation affects the stroma – the connective tissue that surrounds organs. The rationale for this focus is that stromal characteristics can influence the cell types into which stem cells differentiate and can cause non-cancerous cells to transform into cancerous cells. Importantly, placing a tumour cell on healthy stroma can slow tumour progression or even guide the cell back to a non-tumour state.

The team’s extensive work centres on the premise of reprogramming the stromal microenvironment, which evolves throughout the course of inflammation, providing increasingly fertile ground for tumorigenesis. Could reprogramming the stroma help treat CIACs by guiding them back to a non-cancerous or benign state? And could cancer be prevented in people with chronic inflammatory conditions, such as Barrett’s oesophagus or inflammatory bowel disease (IBD), by reversing the inflammation effects in the stroma?

“It seemed to me that reprogramming the stroma to control adjacent cancer cells could provide a more effective option than targeting the cancer cells themselves,” says Thea Tlsty, leader of the STORMing Cancer team, based at the University of California, San Francisco. “It’s a bold idea, but that’s exactly what Cancer Grand Challenges urges, a bold leap forward.”

Shifting perspectives: an early, active role of the ECM in inflammation

Chronic inflammatory conditions are associated with many changes in tissues, including the accumulation of immune cells and alterations in cell architecture, such as the degradation of the extracellular matrix (ECM), the network that surrounds and supports cells. These changes had been assumed to occur after inflammation develops and progresses. But members of the STORMing Cancer team have recently shown that the ECM undergoes distinct remodelling changes much earlier than originally thought – even before the effects of inflammation appear.

These findings came from a study co-conceptualised by former PhD student Elee Shimshoni and group leader Irit Sagi at the Weizmann Institute of Science, Israel, and conducted in collaboration with STORMing Cancer co-investigator Uri Alon. The results, published in Matrix Biology, show how pioneer immune cells infiltrate the areas affected by IBD very early in the inflammatory process, bringing with them the remodelling enzymes MMP2 and MMP9, which degrade the basement membrane, a dense type of ECM important for structural support. Damage to this membrane exposes the immune system to resident bacteria in the colon, which can further drive inflammation.

“This correlates with a number of studies that have found ECM remodelling enzymes upregulated in human IBD,” explains Elee, the first author of the study. “But the surprising factor is that this occurs pre-symptomatically.”

The findings were observed in mouse models of two types of inflammation – a rapid, acute model of colitis (induced by the chemical dextran sodium sulfate) and a chronic inflammation model (based on interleukin-10 gene deficiency) that closely mimics IBD in humans – and were also validated in human samples. “This was surprising, as chronic and acute inflammation are very different processes,” Elee notes. “From an ECM standpoint, however, it doesn’t seem to matter if it will be chronic or acute – there’s something very similar happening to prepare the tissue for inflammation.”

Collectively, the findings have biological importance. “Conceptually, changes to the ECM are often seen as by-products of inflammation. Here, we show these changes are actively contributing to its progression,” Elee adds.

Clinically, early intervention is key for preventing the cascade of chronic inflammation into irreparable tissue damage. “The pre-symptomatic ECM has a unique signature distinguishing it from a healthy one: it’s less stiff, with a different composition of proteins and an overall altered structure. This could support early detection of IBD and lead to new, improved therapies.”

“At the crux of what we’re exploring”

“Elee, Uri and Irit’s study is seminal, really quite beautiful and at the crux of what we’re exploring in the STORMing Cancer team,” says Thea.

STORMing Cancer is studying CIACs in four tissues: the oesophagus, stomach, colon and lung. The team’s unique experimental design enables the development of pioneering pre-clinical models as well as the ability to test potential therapeutics. As part of this effort, Elee, now a Cancer Grand Challenges postdoctoral researcher in the laboratory of STORMing Cancer co-investigator Don Ingber at the Wyss Institute for Biologically Inspired Engineering, US, is exploring the roles of stromal components in maintaining a healthy epithelium versus promoting neoplastic transformation and cancer progression, by using 3D co-cultures of samples from healthy, abnormal and cancerous regions of the same patient.

Given that up to 25% of all cancer deaths worldwide are a direct consequence of chronic inflammatory disease, a better understanding of the underlying mechanisms and changes triggered throughout the inflammatory process will be key to improving outcomes, leading to novel strategies for prevention, detection and treatment. By broadening the focus to include these very early structural changes, this study further highlights the potential for early stromal intervention, possibly before symptoms start.

“Inflammation-associated cancers are among the most lethal cancer types in the world,” Thea says. “This is what keeps me up at night and why I’m so excited by the opportunity we have with Cancer Grand Challenges.”