“We wanted to do everything we could to support them”: Nick and Annette Razey give £1m to back Cancer Grand Challenges team 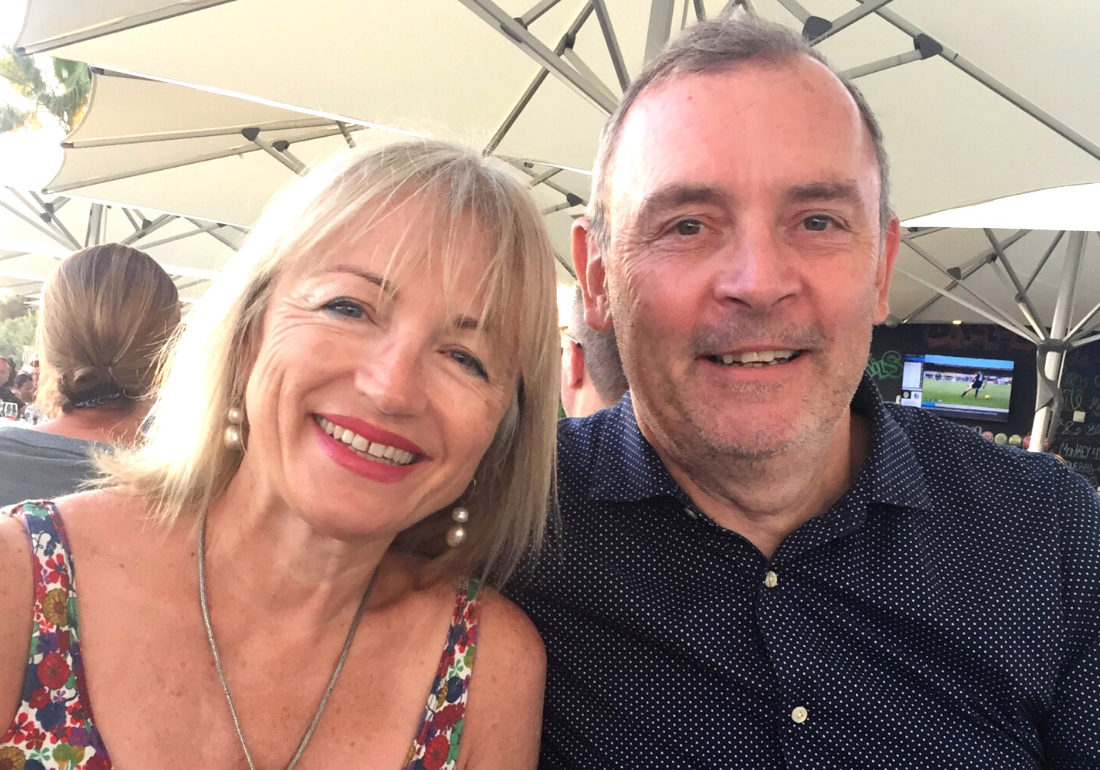 Their donation, which rises to £1.25m with Gift Aid, will help scientists uncover secrets of the microbiome, which could lead to new colorectal cancer treatments.

“I sold my company back in July, and we’re lucky to have made some money,” says Nick Razey, who just a few months ago finished successful treatment for colorectal cancer. “Last year was miserable. But now, I’m feeling really good.”

Nick and wife Annette decided to use the proceeds from the sale of the business to support Cancer Grand Challenges - a unique opportunity to back cutting-edge, international research. “I love the fact that it’s so collaborative,” says Annette. “Scientists from across the world coming together to work so hard on a particular challenge – we wanted to do everything we could to support them.”

One team particularly stood out. OPTIMISTICC is a group of more than 60 investigators from Canada, the Netherlands, Spain, the US and the UK. They’re using their diverse specialisms, including genomics, microbiology and pathology, to unravel the hidden world of the microbiome. It’s becoming increasingly clear that this collection of trillions of microbes, spanning bacteria, fungi and viruses, is intricately linked to colorectal cancer. By exploring how these microbes drive cancer and influence a person’s response to treatment, and then translating their findings into clinical strategies, the OPTIMISTICC team could transform outcomes for people with colorectal cancer around the world.

The team has already published critical findings on the relationship between the microbiome and colorectal cancer, including revealing how FFAR2, a receptor for short-chain fatty acids produced by intestinal microbes, drives cancer by altering the microbiome’s composition. Loss of FFAR2 in mice increases intestinal bacterial load by reducing the integrity of the gut barrier. In turn, this promotes the exhaustion of CD8+ T cells and overactivation, and eventually death, of dendritic cells – and contributes to the development of colorectal cancer. The study also highlights the potential of using an FFAR2 agonist to reduce tumorigenesis, which could lead to a new way to treat the disease.

Nick’s experience was certainly a factor in the couple’s decision to support the OPTIMISTICC team, but their motivations extend beyond the impact this could have on colorectal cancer outcomes. “So much of the immune system is in the gut,” explains Annette. “Findings relating to improving the immune system there won't just help prevent colorectal cancer, they could also help prevent a whole load of other diseases.”

Nick agrees. “There were various exciting projects that we could have chosen. But we wanted to see our donation go towards something that we could really follow and see the end results of,” he explains. “That’s what OPTIMISTICC offers. We both have an interest in gut health too, and find it fascinating that people used to think the brain was in the gut. It all struck a chord with us.”

Developing a relationship with the research

Through Cancer Grand Challenges, the couple have been able to meet remotely with the team’s principal investigators Professors Matthew Meyerson and Wendy Garrett – based at Harvard Medical School and the Dana-Farber Cancer Institute – to hear about their progress directly. Nick says this opportunity to engage has been highly rewarding. “By sponsoring a team, you develop a relationship with the research and the scientists. You feel proud that they're doing well.”

Their relationship with OPTIMISTICC has also given Annette a new appreciation for how hardworking researchers are. “I’ve come to realise what a slog it can be being a scientist. You hear about discoveries in the news, but you don’t hear about the years and years of very diligent research and false starts that led to them,” she says. “It really does take a certain type of person to put all that work in and to keep going without ever having certainty about the end result.

“I have tremendous admiration for scientists in the OPTIMISTICC team who work long hours and are so committed to their research. The COVID-19 vaccines show how much the scientific community can achieve, even when the odds are stacked against them. It’s made me realise how much we can do to help fight cancer and detect it earlier. When money and time is ploughed into research, scientists can produce amazing results.”