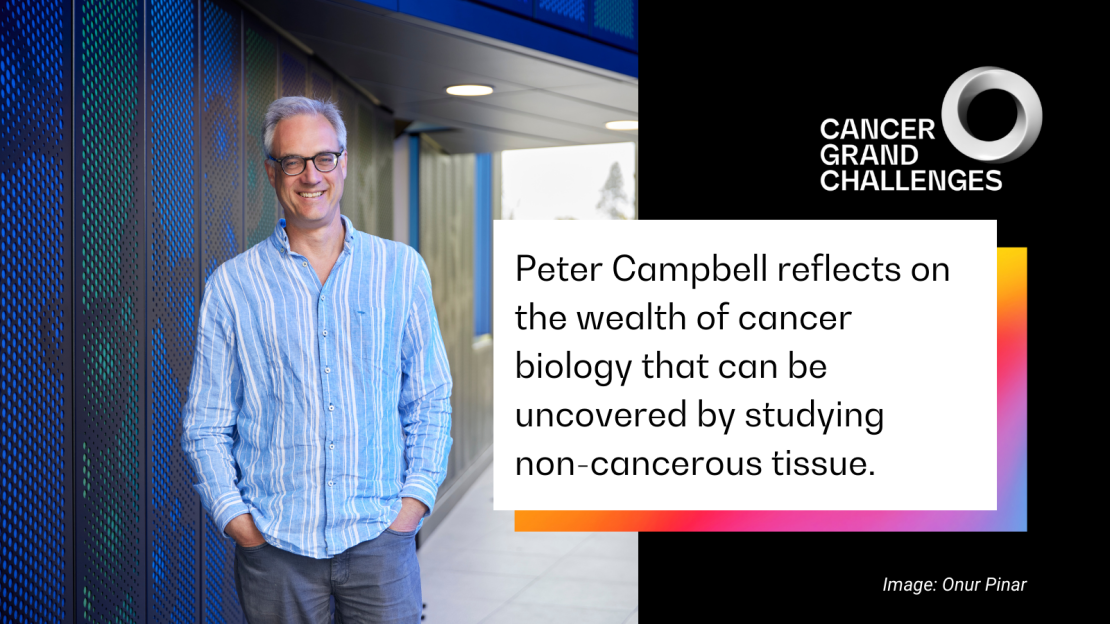 What can studying non-cancerous tissue from people with cancer teach us about a tumour? Dr Peter Campbell (Sanger Institute, Cambridge, UK), co-investigator of the team taking on our Unusual Mutation Patterns challenge, reflects on the wealth of information that can be uncovered.

What causes cancer incidence to vary in different parts of the world? When taking on the Unusual Mutation Patterns challenge, this is the question we set out to answer – and it fascinates me. Differences in regional cancer incidence have been systematically documented for upwards of 50 years. Occasionally, we’ve found the basis for that difference, but for the vast majority of cases – such as pancreatic cancer, which is common in Central Europe and Japan, but much rarer in East African countries and South America – we still have very little insight.

There must be other lifestyle, environmental or maybe inherited factors that we’ve yet to identify, which could be the key to preventing these cancers. By uniting experts from the worlds of epidemiology, cancer and genomics, we’ve developed a new way to study mutational signatures – characteristic patterns of damage left on DNA by exposure to mutagens and genetic disorders. This incredibly powerful metaphorical microscope lets us build a high-resolution picture of a tumour’s molecular characteristics, allowing us to understand the roles of these exposures in the journey to malignancy.

While most of the Mutographs team has focused on the larger puzzle of cancer tissue, in my sub-team’s work, we’ve flipped it around to focus on normal tissue samples donated by people with breast, blood, liver and lung cancers. These cells have developed in the same context as the tumour, experienced the same exposures and have the same potential to succumb to inherited abnormalities, yet they haven’t gone through the same evolution as their cancerous neighbours.

So, as we begin to wrap up my package of work, what have we learned by analysing normal tissues? And how much can this information tell us about the early stages of tumour development?

An unexpected degree of complexity

We’ve certainly seen a degree of complexity in normal tissues that we didn’t anticipate. We know there are a bunch of mutagens that leave mutational signatures and are associated with an increased risk of cancer, for example, tobacco in lung cancer or aristolochic acid – a compound in some herbal products – in liver and urinary tract cancer. The really striking thing we’ve found is that we can see the same signatures of damage in normal tissues as in the tumour.

More surprising, however, is the extent to which these mutational signatures vary across the tissue. Neighbouring sections of liver less than a millimetre apart can possess the signature for aristolochic acid exposure but have 10-fold differences in its signal. Similarly, while nearly all cells in the lungs of heavy smokers carry the signature of tobacco exposure, there seems to be a small protected population of cells with a mutational landscape comparable that of to a non-smoker's lung. It’s these uninjured cells that replace their damaged neighbours and repopulate the lung after a person quits smoking.

This finding was totally unexpected. I’d have thought that all cells exposed to these chemicals would possess the same catalogue of mutations and the same chance of becoming cancerous. What drives this difference in vulnerability to these exposures? Are some cells protected from damage or more effective at neutralising carcinogens than their neighbours? Our research has certainly made us ask all sorts of interesting follow-up questions, which we’re just starting to explore.

Ultimately, these unexpected findings mean that we can gather information about biology from normal tissue similarly to cancerous tissue.

First, looking for recurrent mutations in multiple cancer genomes can identify genes responsible for changing biology – and we can learn the same from non-cancerous tissue. In liver tissue, we identified three genes that affect how cells metabolise fat and respond to insulin, and consequently underpin the biology of obesity and type 2 diabetes. In some people, mutations in these genes lead to organ-wide changes in liver function and can result in chronic liver disease, which affects roughly 1.5 billion people worldwide. Although neither gene is linked to liver cancer, our findings provide important clues about diseased-liver biology and may prove useful in understanding the changes that a liver undergoes at it evolves to become cancerous.

Second, searching for mutational signatures in both cancerous and normal tissues can tell us which factors have influenced the environment in which the cancer evolved. To become cancerous, a cell must develop mechanisms to escape the normal constraints on its growth, as well as to invade tissue barriers and evade the immune system. These mechanisms are very important to study, but the genomes of these cells are dynamic. Our findings suggest that analysing normal tissue from people with cancer could provide a faithful representation of past exposures that might have been important early in the tumour’s development and therefore might identify new opportunities for intervention.

We’re currently exploring this possibility in breast cancer, which is epidemiologically a very interesting disease whose risk is influenced by a combination of many factors, including inherited mutations, age and reproductive history. By studying normal breast tissue from people with breast cancer, we’re starting to unpick the molecular basis for some of these epidemiological observations – and the data we’re getting are amazing. We’re able to see some of that DNA damage in normal tissue and track it back to an exposure sometimes occurring decades before the initial diagnosis.

Finally, in both cancerous and normal tissues, we can pool this information to make relatively profound statements about how the tissue has evolved. With the liver, for example, we can map the early biological changes with which normal cells adjust to sustained insulin exposure and how this leads to a chronically diseased liver; we can also track how this process of damage and regeneration drives the tissue towards malignancy. Most exposed cells will never take another step down the road to malignancy, but in some people they will. Mapping out the roles that these changes play early in a tumour’s development is important for understanding cancer risk.

The Unusual Mutation Patterns challenge called for us to look beyond our own disciplines – to adopt a new philosophy in a holistic approach to answering a question that none of us could address individually. It’s been very rewarding to work in this way. As we begin to wrap up this package of our work, we are reflecting on how we’ve advanced our understanding of the question at hand.

It’s exciting to think about what we could do with this information. The idea that intrigues me the most is the possibility that we could tip the balance so that the growth of healthy cells without or with a limited mutational signature is favoured over that of their cancerous neighbours. This seems to be what happens when a person quits smoking: a niche of protected cells rises up to replace many of the damaged cells and is why people’s risk of lung cancer shrinks when they stop smoking.

Harnessing this biological phenomenon sounds like science fiction, but I can imagine a world where we work out how to tip the balance so that normal cells outcompete their neighbours as a novel strategy for cancer prevention and treatment. We’re a long way from reaching that stage. But we certainly can’t do it without understanding the underpinning biology – this is the stage we’re in now.

As told to Emily Farthing

The Mutographs team is funded by Cancer Research UK