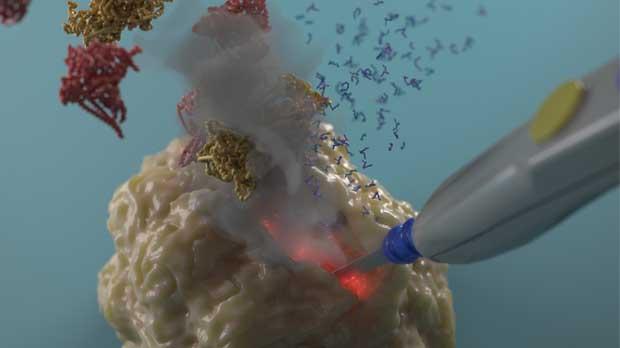 Research from the Cancer Grand Challenges Rosetta team has identified a potential metabolic weakness in cancer that could be amenable to treatment.

The findings, published in Cell, focused on exploring whether the metabolic changes known to occur at a cellular level in breast cancer can stratify patients and help to identify novel and potentially targetable vulnerabilities.

Led by Dr George Poulogiannis at the Institute of Cancer Research in the UK, the team used the Intelligent Knife (iKnife) to measure real time differences in tumour metabolism. In mouse models, they have unravelled the mechanisms behind tumour-driving metabolic changes that occur as a result of the common breast cancer mutation PI3KCA.

They observed enhanced arachidonic acid (AA) production, known to promote tumour growth and reduce anti-cancer immune responses. They also found a unique way to address the negative implications of mutant PI3KCA to reduce tumour growth: combining the inhibition of cPLA2, an enzyme known to mediate the cellular release of AA, and a fatty acid free diet, to remove external sources of AA.

Although it is still early days, George says “I think this is one of the first few studies that shows a dietary fat restriction plays a major role in therapy response.”

This is a step further towards understanding the complex relationship between cellular metabolism, cancer and diet. And is just one part of the Rosetta programme, spearheaded by Professor Josephine Bunch, aiming to create a ‘Google earth of cancer’.

Find out more about the Rosetta team