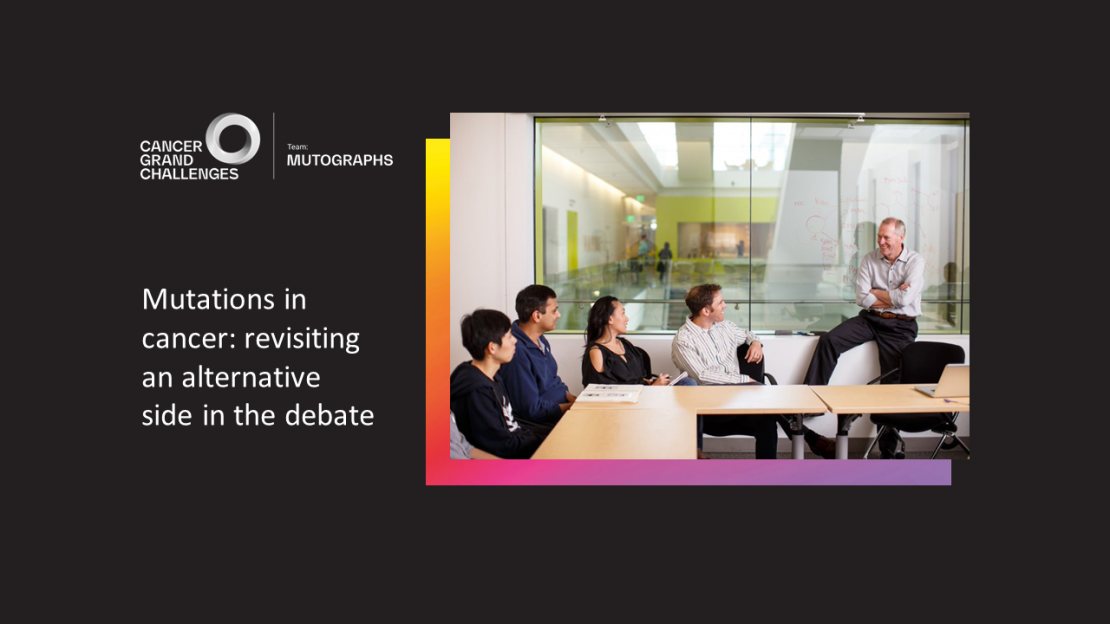 Surprising discoveries from the Mutographs team challenge the classical view that all carcinogens directly cause mutations and suggest that non-mutagenic agents play a greater role in tumour promotion than originally thought.

Dangerous levels of exposure to a carcinogen can elicit specific patterns of DNA damage, both genetic and epigenetic. If a tumour eventually develops, these mutational signatures can be used to work backwards to identify exposure to both known and previously unknown carcinogenic agents. Many mutational signatures exist whose origins are not yet known. Understanding the mechanisms that lead from an initial injury to mutation might hold promise in uncovering new preventive targets to stop, delay or weaken carcinogenic effects.

The Cancer Grand Challenges Mutographs team is tackling this challenge, uniting a global, multidisciplinary team doing transformative work at the intersection of epidemiology and genomics. By studying the mutational signatures in the genomes of cancer cells versus normal cells, the team aims to comprehensively catalogue the mutational processes that cause cancers in humans, understand their causes and apply this knowledge to cancer prevention.

“We’ve only very recently entered the era where all this is possible,” says Mike Stratton, Mutographs team lead at Wellcome Sanger Institute, UK. “The first human genome was only sequenced in 2009 – but to do epidemiological studies, tens or hundreds or thousands of genomes are required. Outstanding recent technological advances in sequencing methodology mean it is now possible to sequence tens of thousands of genomes in one study – and that is what makes Mutographs possible.”

One arm of the Mutographs team aims to identify, characterise and understand the biological processes underlying mutational signatures by using animal models. In late 2020, in Nature Genetics, the team published their results, which unexpectedly suggest an alternative view challenging the classical view that carcinogens directly cause mutations.

Led by Allan Balmain with colleagues David Adams and Laura Riva, the team worked with the US National Toxicology Program (NTP) to conduct the first survey of a broad range of chemicals that were known or suspected environmental carcinogens in mouse models that accurately represented exposure. Most of the agents in the NTP sample collection were expected to be mutagens – one such chemical was trichloropropane (TCP), which is often present in drinking water near toxic-waste sites. Some people living in areas where the groundwater has been contaminated have high TCP exposure.

However, what the team discovered was surprising. Only three of the 20 compounds tested had clear evidence of mutagenic activity, inducing tumours with more mutations and distinct mutational signatures. These three compounds included TCP. “This validates the animal-model component of the Mutographs programme,” explains Allan. “We’ve shown you can use genome sequencing to link carcinogens to a molecular signature of exposure.”

Interestingly, even though most of the chemicals did not have a mutational signature specific to exposure, they did accelerate tumour development. The chemicals appeared to promote the transition of spontaneously mutated cells in mice from a dormant state to actively growing lesions, and consequently increase tumour incidence. These results align with findings from a study of oesophageal cancer in humans from another part of the Mutographs programme.

Mutations in cancer: revisiting an alternative side in the debate

“The concept of non-mutagenic promoting agents is not new – researchers were conducting experiments 70 years ago, which suggested some chemicals acted as promoters,” says Allan. “But it was phenomenology then, as they didn’t have the tools to interrogate mechanisms as we do now. We’ve repeated some of these experiments and applied our newer tools, and their interpretations were spot-on – without even knowing what a gene was at the time.”

In the literature from the past decades, the debate regarding the roles of mutations in cancer has focused predominantly on mutations that either spontaneously occur in DNA or are induced by environmental agents. In 2015, a seminal article by Tomasetti and Vogelstein gave rise to the bad-luck hypothesis, which suggests that mutations are mainly caused by spontaneous errors in DNA replication. The debate since then has centred on whether these mutations are spontaneous replication errors or are induced by the environment.

But Allan, Laura, David and their team believe an alternative view is missing from the debate: the promoter hypothesis. Perhaps another risk factor exists that is unrelated to the induction of mutations – for example, tumour-promoting factors might activate spontaneously or chemically mutated cells as the rate-limiting step in tumour formation. We know from epidemiological data that factors such as inflammation and obesity contribute to cancer in humans, but this relationship remains to be quantified and explored at a mechanistic level. Could this contribution occur via tumour promotion?

The team’s data suggest that, in mice, the rate-limiting factor is the promotion, not the mutation. Now how this finding in mice translates to the human setting must be understood. “It certainly doesn’t negate any of the work that’s been done on mutational analysis, as mutations are clearly essential for tumours to develop,” Allan notes. But these findings could shift the debate towards exploring how other risk factors affect cancer incidence in humans, taking us back to basic cell biology to understand how these agents work and how they can cause single mutated cells to become active growing lesions.