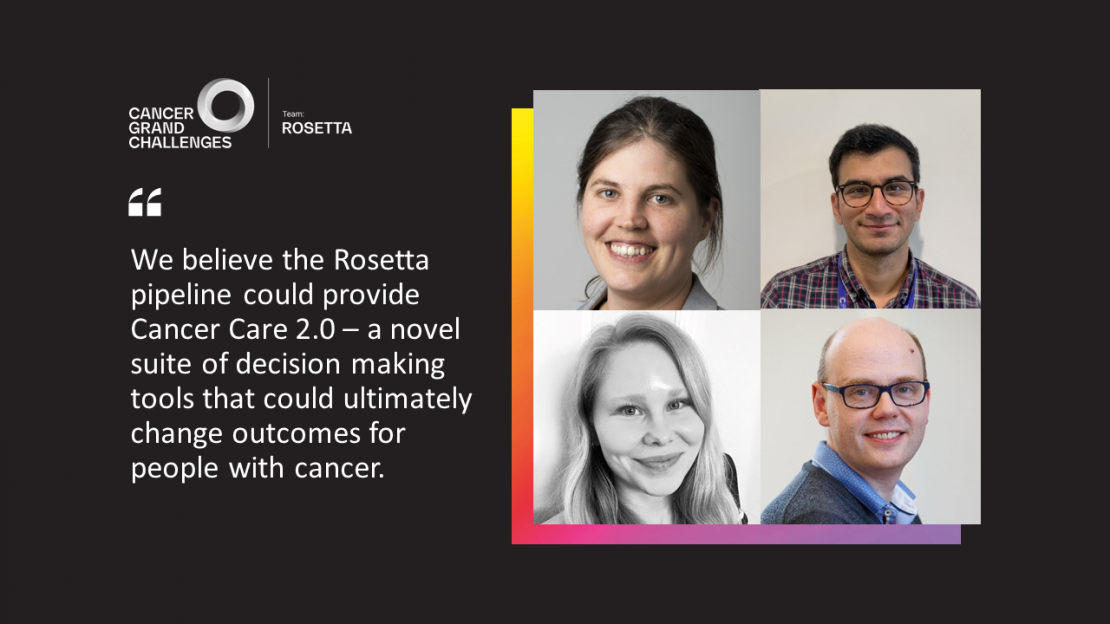 A deeper understanding of the metabolic changes during tumour development could radically change clinical decision-making and unlock opportunities to intervene across the entire patient journey.

Cancer cells exist in complex communities: each cell in a tumour is different from its neighbour and relies on its microenvironment to support its existence. These interactions are likely to contain new information on tumour behaviour, prognosis and treatment responses, and therapeutic targets waiting to be uncovered.

The 3D tumour-mapping challenge seeks to unravel this complexity by taking a holistic view of tumours as an organised population of cells. Rather than examining individual aspects in isolation, this view integrates genetic, molecular and biochemical information alongside the intricate intra-tumour architecture. In our first round of funding, when emerging technologies such as in situ and single-cell sequencing and high-resolution imaging were providing a first glimpse of biological cartography, the challenge represented an important opportunity to harness recent technological advances and develop novel ways to capture cancer’s complex 3D architecture.

Taking on this challenge, the Cancer Grand Challenges Rosetta team is establishing an organ-to-subcellular tumour map by using a range of mass spectrometry imaging (MSI) techniques, including matrix-assisted laser desorption/ionisation (MALDI), desorption electrospray ionisation (DESI) and rapid evaporative ionisation (REIMS). This pipeline of techniques can be used to image and correlate the distribution of molecules, genetic information and metabolic signatures in single cells, to produce a ‘Rosetta stone’ for cancer metabolism.

Over the past four years, the Rosetta team has advanced the pipeline beyond the original expectations. The team has made important technological breakthroughs and produced a sophisticated suite of tools that have elevated MSI from a promising research method to a fundamentally new way of analysing cancer.

Rosetta has now turned its collective attention towards studies with greater clinical focus, by using the MSI pipeline to better understand tumour metabolism and make discoveries that could potentially improve all stages of the patient journey. In findings published in Nature Genetics in early 2021, the team identified a new therapeutic target for colorectal cancer, shedding light on the profound rewiring of tumour metabolism that occurs when APC and KRAS are concomitantly mutated.

Mutant KRAS is a pressing clinical problem that is found in as many as 45% of colorectal cancers and 95% of pancreatic cancers, and is often associated with poorer patient outcomes. Although this mutation has long been known to alter tumour metabolism by rendering cells ‘addicted’ to the amino acid glutamine to support their proliferation, no clinically relevant targets have emerged to date.

Using its unique approach for imaging metabolic heterogeneity, the Rosetta team has identified a potential metabolic target: the antiporter SLC7A5. The findings challenge the long-held assumption that the breakdown of glutamine fuels growth in these cells. Instead, the increased demand for bulk protein synthesis is supported by SLC7A5’s ejection of glutamine from the cell and the importation of other products of metabolism from the surrounding tissue. The team has also demonstrated that Slc7a5 is critical for tumour development in both early and late stages of Kras-driven colorectal cancer in mouse models.

Rosetta’s study advances the field beyond simply documenting the effects of KRAS mutations on tumour metabolism, through beginning to reveal the complex mechanisms underlying these changes. By pinpointing SLC7A5 as a promising target for treating KRAS-driven colorectal cancer, Rosetta’s findings could be transformative for people whose tumours have become resistant to other treatments. The team’s fundamentally new way of analysing cancer could be valuable throughout the course of detection and treatment, from screening and diagnostics to advanced therapies and follow-up monitoring.

The discovery, only one of many clinically relevant findings emerging from the Rosetta team, highlights the power of the 3D tumour-mapping platform and the novel insights that can be gained when tumour metabolism is viewed in this holistic way.