Unravelling the drivers of immune evasion in head and neck cancer 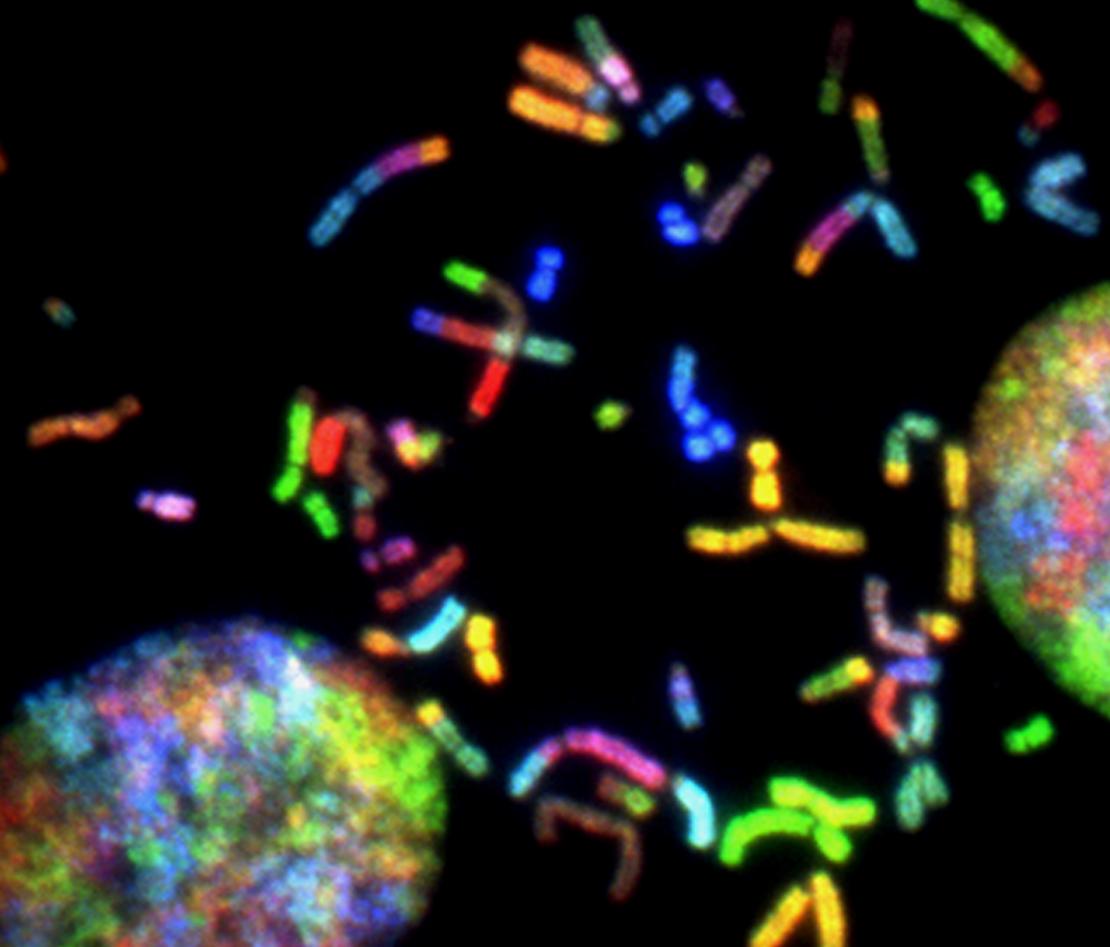 How do tumours avoid attack from the immune system?

For some head and neck cancers, the answer lies on the short, p, arm of chromosome 9 – findings from the Cancer Grand Challenges SPECIFICANCER team which could lead to new ways to prevent and treat the disease.

Hot, cold or somewhere in between?

A key unanswered question in cancer biology is how a tumour escapes the immune system, evolving from immune-hot to immune-cold. While hot tumours are prone to recognition by the immune system and likely to provoke a strong immune response, cold tumours are often impenetrable by immune cells.

Members of the SPECIFICANCER team and collaborators have identified the ‘switch’ that triggers the transition from immune-hot to immune-cold in a type of head and neck cancer. In pre-cancer, the loss of a region of the chromosome 9p arm, 9p21, triggers an immune-hot response, keeping the pre-invasive lesion in check. But as the tumour develops and spreads, the deletion size of chromosome 9p is progressively increased, until the entire arm is lost.

It’s this loss of the chromosome 9p arm that both switches the tumour microenvironment from hot to cold and drives precancerous lesions or early tumours to develop to invasive, progressive disease.

“Losing the chromosome 9p arm causes a profound depletion of cytotoxic T cells in the immune microenvironment surrounding the tumour,” says Teresa Davoli, co-lead of the study and SPECIFICANCER co-investigator at NYU Langone Health. “While it’s not yet clear whether this transition from hot to cold is gradual or abrupt, it’s so strong that we’ve coined a new phrase: the aneuploid checkpoint.”

Head and neck squamous-cell carcinoma (HNSC) is the 6th most common cancer worldwide and cases continue to rise. Of the 900,000 newly diagnosed cases in 2018, human papilloma virus (HPV)- -negative HNSCC, the focus of this study, represented the most common and lethal subtype.

“By identifying this immune switch, our work could lead to much needed strategies to both prevent HPV-negative HNSC and treat people with the disease,” says Teresa.

The driver of immune evasion – or just a by-product?

A hallmark of human cancer is genome and chromosomal instability. This often results in the translocation, duplication or deletion of entire chromosomal regions, like the 9p21 region or the 9p arm, or even gains and losses of whole chromosomes. This is aneuploidy, the presence of an abnormal number of chromosomes in the genome – very rarely found in healthy tissues but frequently found in cancer.

In 2017, in a seminal Science paper, Teresa and colleagues, including SPECIFICANCER team lead Steve Elledge, identified a correlation between aneuploidy and immune-cold tumours in a range of cancer types. This was notably strong in HNSC. Chromosomal arms 3p and 9p have previously been highlighted and confirmed as important in HNSC progression, with loss of one or both putting a person at higher risk of invasive, aggressive cancer.

But the mechanisms behind this association have, until now, remained elusive.

"We’ve seen considerable debate over the years, since our report regarding how chromosomal instability and aneuploidy drive HNSC,” says Scott Lippman, co-lead of the study and director of the Moores Cancer Center, University of California, San Diego.

The debate has centred on whether 3p and 9p loss are non-specific markers, or by-products, of chromosomal instability in HNSC – or whether there’s something specific about one or both of these chromosomal arms that drives the transition from hot to cold when lost.

“We went into the study assuming the former – but it’s actually a combination of the two,” says Scott.

While the loss of 3p seems to be a surrogate marker of chromosomal instability with limited direct impact on disease evolution, the loss of 9p is by far the strongest driver of HNSC’s transition from immune-hot to immune-cold during precancer invasion and progression.

"It was a real surprise to me that 9p loss is such a strong driver of the immune switch, and dramatically redirected our analytic line of inquiry,” Scott adds. “Through an extensive series of studies, involving 4 patient cohorts and 32 cell lines, we followed clues that focused more and more tightly on specific 9p imbalances that drive changes in the immune-cell composition of the tumours that in turn dictates responsiveness to immunotherapy”.

“The 9p arm is a hotbed of immune-regulatory genes,” says Teresa.

For example, a number of genes responsible for modulating the immune microenvironment reside on the 9p arm, including well-established immune genes JAK2, PD-L1 and -2 and the entire interferon-alpha cluster of genes. The team also identified novel candidate genes here, RANBP6, IL33, MTAP and TOPORS.

Mechanistically, it’s the loss of these genes that drives the immune switch in the tumour microenvironment – but they aren’t deleted all in one go. Instead, up to 40 genes on the 9p arm are cumulatively deleted until the threshold of the aneuploidy checkpoint is reached, and eventually disabled, switching the microenvironment from hot to cold, and allowing the tumour to escape host immune recognition.

“The gradual loss of these genes is not only important for understanding the tumour’s natural history and how it evolves to become immune-cold,” says Teresa. “It also provides opportunities for clinical intervention.”

For example, loss of 9p21 in HNSC precursor lesions is a strong predictor of prognosis. Could this information be used to develop prognostic biomarkers? And could immune therapies be utilised in high-risk patients to keep their pre-cancers immune-hot, preventing invasion?

In a real-world dataset, loss of 9p identified patients who are least likely to respond to anti-PD-1 immunotherapies, like pembrolizumab and nivolumab. As the disease progresses, the 9p arm and associated immune-regulatory genes, particularly JAK2 and both PD-1 ligand genes, are progressively lost, greatly limiting the efficacy of these therapies. These predictive biomarker findings align with the consistent association between 9p loss and the transition of the tumour microenvironment to immune cold, suggesting information about a tumour’s 9p status could be used to guide precision immune treatment.

And finally, are novel therapeutic targets hiding on the chromosome 9p arm? “Our group is in the middle of dissecting 9p further to better understand the genes that are lost with its deletion,” says Teresa. “A deeper understanding of this could lead to new therapeutic strategies.”

How does aneuploidy drive immune evasion in other cancer types?

“Our findings have major implications for people with HNSC, and for the field in general,” Scott says. “We’ve known since 1996 that aneuploidy is involved in the progression of HNSC, but we never understood what was going on until now. That’s testament to our collaboration, which unites complementary expertise and skills.”

With a background in basic cancer biology and a team of cell biologists, immunologists and computational biologists, Teresa brings expertise in genomics, including aneuploidy and how normal cells maintain their genome.

Meanwhile, having treated people with head and neck cancers for many years, Scott approaches the challenge of immune-cold tumours from a translational perspective. “Although immune checkpoint inhibitors represent a major breakthrough in cancer treatment, only 15% of patients with HNSC respond to treatment – the ability to predict a patient’s response or resistance to this class of agents, and inform clinical decision making accordingly, could make a real difference in the clinic.”

It’s fair to say Scott and Teresa’s collaboration is a silver lining of the past two years’ events – despite never actually meeting in person and being separated by more than 2,700 miles, the team has made use of new tech to regularly meet in the virtual world. “Lockdown has been challenging in so many ways, but not travelling or commuting has given us the gift of time to really focus on this problem,” Scott adds.

Moving forwards, Teresa, Scott and the team plan to apply a similar approach to other cancer types, to understand whether patterns of aneuploidy and recurrent copy-number alterations drive immune evasion in other cancers and can be used to predict therapeutic patient outcomes.

This feeds into the core aim of the SPECIFICANCER team, which is to understand how and why certain genes cause cancer in some parts of the body, but not others. “We’ve seen such a striking effect of the loss of 9p in HNSC,” says Teresa. “It’ll be interesting to see whether similar patterns are true for other tissue types.

“Understanding more about the way aneuploidy influences the immune microenvironment in different parts of the body will play a key role in unravelling our Cancer Grand Challenge of tissue specificity.”

SPECIFICANCER is generously supported by The Mark Foundation for Cancer Research.