Clusters of mutations: a new driver of tumour evolution 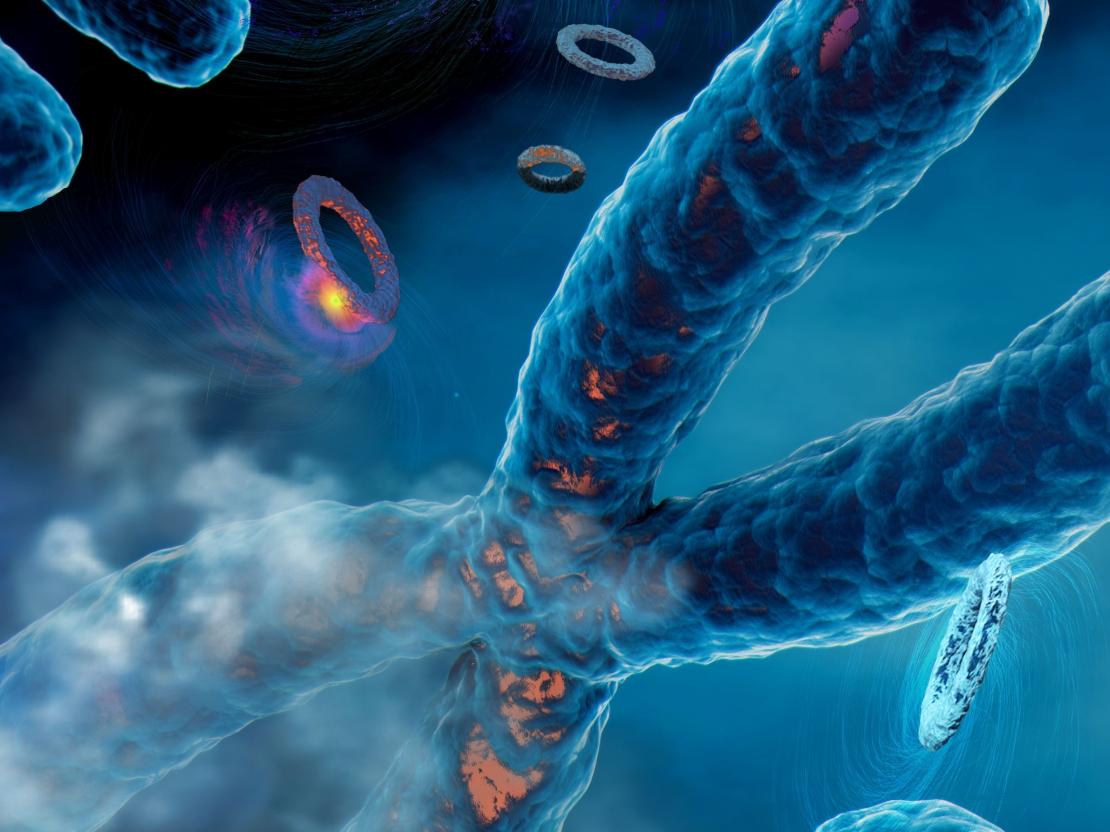 Artificial intelligence techniques developed in response to our Unusual Mutation Patterns challenge have led to the identification of a new player in tumour evolution: clusters of mutations that aggregate at specific regions of the genome.

A new study suggests that these clusters, which fuel tumour evolution in around 10% of people with cancer and are associated with differences in survival, may be used to predict patient outcomes. The study also reveals a novel role of the APOBEC3 family of antiviral enzymes in tumour evolution, via repeated hypermutation of extrachromosomal DNA.

Unique patterns of DNA mutations can contribute to cancer development. Although these mutations are mostly independently scattered throughout the genome, some cluster at specific DNA regions, such as in a pattern called ‘kataegis’, derived from the Greek word for thunderstorm. (A great video explanation can be found here.) These clusters are found in many types of cancer, but their roles have remained elusive.

Findings published today (9 February, 2022) in Nature now reveal that these somatic-mutation clusters contribute to the development and evolution of around 10% of human cancers. What’s more, because the presence of these clusters in certain genes strongly correlates with survival, this information could be used to inform clinical decision-making.

The study is a major new output from the Cancer Grand Challenges Mutographs team, as part of their efforts to take on our Unusual Mutation Patterns challenge. “These hotspots of mutations are unusual – we expect mutations to scatter, not to cluster,” says Ludmil Alexandrov, co-investigator of the team and senior author of the study at the University of California, San Diego. “We couldn’t help but wonder why they exist and whether they can tell us something important about how a tumour has developed.”

Using SigProfiler, a suite of artificial intelligence and machine learning tools developed in-house, the team built a comprehensive map of mutations across the cancer genomes of more than 2,500 patients, encompassing 30 different tumour types. They were then able to detect clustered mutations within individuals and unravel the processes that give rise to such events.

“Clustered mutations haven’t received a huge amount of attention, because they only make up a very small percentage of all mutations,” says Erik Bergstrom, a bioengineering PhD student in the Alexandrov lab and the first author of the study. “But by diving deeper, we uncovered an important role of these events in the aetiology of human cancer.”

“We’re still working out the mechanisms responsible for these differences in survival,” says Ludmil. “But the differences are striking.” The team hopes that their findings will inspire future studies to unravel the mechanisms at play and to understand whether specific interventions could be used to improve outcomes.

So how could this information be translated to the clinic? “In a relatively straightforward manner,” Erik muses. Most people admitted to cancer centres have their tumours profiled to look for genetic changes and alterations by using sequencing platforms – for example, MSK-IMPACT, which was authorised for use by the US Food and Drug Administration in 2017.

“We’ve shown that clustered mutations can be detected using existing platforms like MSK-IMPACT, which are already in use – it's just a matter of knowing what information you need to be looking for,” Erik adds. If we can build on the team’s findings and identify a route to intervene, “clustered mutations could provide a simple, precise biomarker for patient survival, which could help clinicians make informed decisions around clinical management.”

Thunderstorms and cyclones: identifying a new route to tumour evolution

Multiple factors have been found to be responsible for driving clustered mutations, including ultraviolet radiation, alcohol consumption and tobacco smoking. However, the most notable factor identified by the study was the activity of APOBEC3. The team has long been interested in the APOBEC3 family enzymes because they induce characteristic patterns of DNA damage and have recently been implicated in nearly all cases of oesophageal squamous cell carcinoma worldwide. APOBEC3 is usually responsible for protecting against viral infection by recognising the circular, double-stranded structure of certain viruses’ DNA and introducing multiple mutations to block their function.

But in tumour cells, additional genetic material is present in high quantities: extrachromosomal DNA (ecDNA) – small circular pieces of DNA with a structure and replication pattern similar to that of a virus. ecDNA frequently contains plethora of cancer-causing genes, including the clinical diagnostic marker MDM2 and others explored in this study, and is thought to play a major role in driving tumour evolution and treatment resistance. (Read more about why we made ecDNA a Cancer Grand Challenge in our last round of funding here.)

The team proposes that APOBEC3 may be ‘confused’ by ecDNA’s structure and behaviour, and treat it as a threat to be eliminated. But repeated mutagenic attacks to ecDNA result in clustered mutagenesis of the oncogenes it contains. Rather than eradicating the threat, this mutagenesis contributes to subclonal tumour evolution, promoting aggressive tumour behaviour and treatment resistance.

The team has coined the term ‘kyklonas’, derived from the Greek word for cyclone, to describe when APOBEC3 mutational clusters and ecDNA are found together in the same cancer. Although kyklonas is not always found in the same cancer, it seems to be more common in cancer types that are harder to treat, including lung cancer and sarcomas, as well as medulloblastoma – a disease primarily affecting children and young people.

By unlocking a deeper understanding of mutational thunderstorms and cyclones – kataegis and kyklonas – the team’s research could lead to new therapeutic interventions to avoid tumour evolution and treatment resistance.

“With these findings, we’ve unearthed important new information about APOBEC3 and ecDNA – where, for both, we previously had gaps in our knowledge,” says Ludmil. “Through the Unusual Mutation Patterns challenge, we’ve had an exciting opportunity to explore a global dataset from an artificial intelligence perspective, and we’re finding very interesting clinical and epidemiological observations we wouldn’t have been able to otherwise. It’s fascinating to think we’ve found this completely novel route to tumour evolution.”