Genes in space: the future of biology is spatial 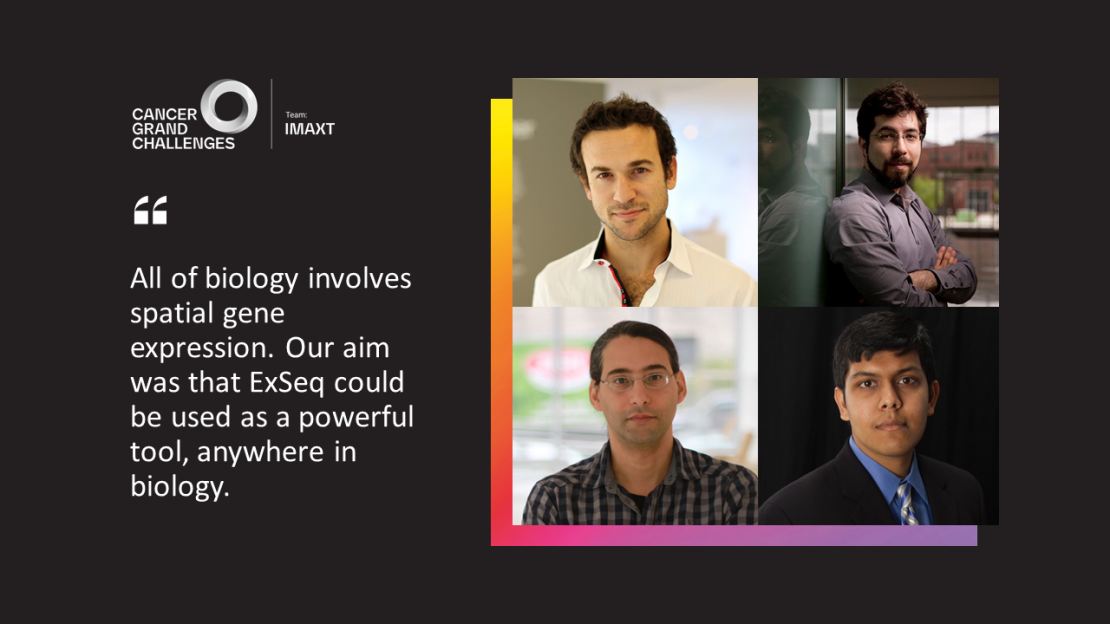 The Cancer Grand Challenges IMAXT team is now advancing the challenge by evolving existing and novel analytical techniques, integrating their outputs and placing them within a 3D context to capture this missing whole-tumour information. The result is a detailed view of the community of cells that make up a tumour, including their precise locations, characteristics and behaviours – information that should enable important questions about tumour biology and evolution to be answered.

Central to this approach is a suite of cutting-edge tumour mapping tools. For example, the team is optimising techniques such as serial two-photon tomography, which produces faithful 3D images of a biological sample. Meanwhile, MerFISH (multiplexed error-robust fluorescence in situ hybridisation) can analyse the number of copies and the distribution of RNAs in single cells, while imaging mass cytometry images the microenvironment by defining the spatial architecture of different cells.

In January 2021, the IMAXT team added a new component, expansion sequencing (ExSeq), to this suite of tools and have reported the methods in Science. ExSeq creates accurate, nanoscale-resolution maps of biological samples, annotated with localised expression information about thousands of genes, by combining two powerful techniques: expansion microscopy, which expands a biological sample to make it physically larger, and fluorescence in situ sequencing, which enables profiles of RNA expression to be determined in intact cells and tissues.

“We’ve made much progress using multiplexed RNA imaging,” explains Shahar Alon, co-lead author of the study and group leader at Bar-Ilan University, Israel. “But these methods are limited in their spatial precision. With ExSeq, we bridge two worlds, achieving the precision of single-cell sequencing, with the added dimension of spatial coordinates.”

Despite having a major role in tumour mapping in the IMAXT programme, ExSeq was originally developed for use in neuroscience. The locations of RNAs within a neuron’s cell body or its thousands of dendrites and synapses can dramatically influence learning, memory and development. “Using untargeted ExSeq, we’ve revealed surprising information about neuron physiology,” says Dan Goodwin, IMAXT PhD student and co-lead author of the ExSeq study at MIT. "We’ve found elements in the dendrite that are only ‘supposed’ to be found in the cell body, like unspliced introns and long non-coding RNAs. This sort of data would normally be dismissed as an artefact, if it were from ground tissue put through a flow cell machine. But because we’re physically able to see their spatial distribution, we’re then able to use targeted ExSeq to explore it further.”

“Our aim was always that ExSeq could be used as a powerful tool anywhere in biology,” Ed Boyden, IMAXT co-investigator at MIT and senior author of the study, adds. “All of biology – be that neuroscience, cancer, development, plant biology, viral transmission – involves spatial gene expression.”

After careful optimisation, ExSeq can now be used in diverse types of tissue, including brain specimens and breast tumours.

With the development and refinement of techniques such as ExSeq, the IMAXT team is already identifying and investigating unexpected features of the 3D tumour environment.

For example, pairing imaging mass cytometry with genomic data has revealed how the genome influences the physical tumour landscape. Applying Clonealign – a statistical method integrating DNA and RNA sequencing in single cells – to breast and ovarian cancer samples has revealed information not visible through either method alone, including dysregulated pathways in specific cell clones.

With ExSeq, the team has identified several novel avenues to explore, including oxygen-depleted (hypoxic) regions in human breast cancer tissue. These regions are a characteristic of aggressive tumours that are rapidly outgrowing their surrounding vasculature, and their presence can influence treatment decisions. “Just by looking at gene expression in neighbouring cells, we can now identify potential hypoxic microenvironments,” says IMAXT PhD student Anu Sinha, co-lead author of the ExSeq study. “Seeing this tissue organisation was very exciting and something that would not have been possible without the ability to look at many genes in space.”

A new way to interact with rich data

When integrated, these technologies appear to capture even more information than when used alone. But with this integration comes another major challenge: such rich data need to be presented in an understandable, interactive form that enables and empowers further investigation.

As technologies such as ExSeq mature, the team is exploring virtual reality as a new way to interact with and manipulate such rich data. The virtual lab, named Project Theia, can visualise both imaging and molecular data, and scientists can now not only fly through their data, virtually soaring through and between tumour cells, but also launch a series of analyses directly from the virtual environment. The interface is also designed for a multi-user mode, so that geographically distant collaborators can meet in the virtual lab to explore and analyse their data together. Theia v1.0 was released for testing in March 2021, and an updated version is due to be released later in the year.

Ultimately, through the integration of these techniques, explored in virtual reality, the team is developing an entirely new way to explore tumour biology, providing an unprecedented view of the architecture of human cancer and unlocking information that could lead to more effective preventive, diagnostic and therapeutic strategies.

“I liken our vision to putting a man on Mars,” muses IMAXT team lead, Greg Hannon. “There’s nothing that violates the laws of physics, but there’s so much technology you have to develop to do it. I’m proud of how far the team has progressed our aims over the past four years.”