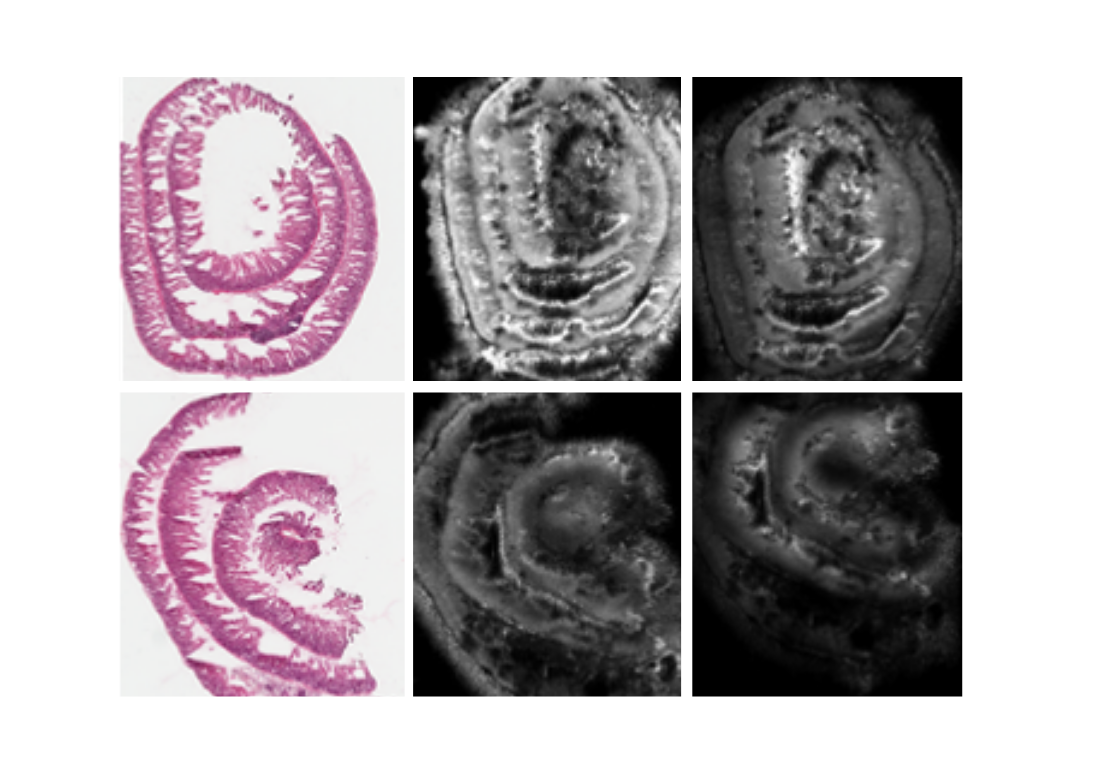 New findings from the Rosetta team have identified the antiporter SLC7A5 as a target for KRAS-driven colorectal cancer.

What is your role within the Rosetta team and this project?

Chelsea: I’m a chemist working in mass spectrometry imaging (MSI). For this particular work, I used matrix assisted laser desorption ionisation (MALDI) and desorption electrospray ionisation (DESI) MSI to analyse samples before assisting in the data processing. I’m very interested in how we can apply MSI techniques to the investigation of complex biological systems.

Owen: My group in Glasgow provides the in vivo models which are analysed and mapped by the wider Rosetta team. My driving interest as a cancer biologist is to determine the molecular hallmarks of cancers, with a particular focus on colorectal and pancreatic cancers.

Rory: I’m an analytical chemist, working primarily in the fundamentals of MSI and its application in biological research. My contribution to this work has been acquiring MALDI and DESI MSI data, associated data analysis and helping to coordinate communications between team members and institutions.

Owen: Mutant KRAS  is very common, found in up to 45% of colorectal cancers, and is usually associated with poorer survival and increased tumour aggressiveness. We’ve known for some time that mutant KRAS alters the metabolic dependencies of cancer cells, rendering them ‘addicted’ to the metabolite glutamine. But a number of attempts to target this vulnerability have failed when they’ve moved into patients or preclinical studies.

What we’ve found using a combination of models is that yes, glutamine is important for colorectal tumour cell proliferation – but not because of a direct role in cell growth. Instead, it’s ejected from the cell by the antiporter SLC7A5, which simultaneously pulls in a range of other metabolites from the surrounding tissue to power tumour cell growth. If we could target SLC7A5, this could give us a real opportunity to target KRAS-mutant colorectal cancer cells, exploiting their energetic needs while having very little impact on normal tissue.

How has the multidisciplinary, collaborative nature of the Rosetta team contributed to these findings and the team’s work?

Rory: A huge part of working on a large interdisciplinary project is effective communication – both in the context of technical discussions and on a more administrative level. Learning to speak one another’s language is key. It’s here that many of the challenges of interdisciplinary working occur, but the benefit of these interactions is massive. As an analytical scientist, I depend on the knowledge and insight our biologically focussed partners bring.

Owen: Compared to cell culture conditions, metabolism in vivo is very different, so we were very keen to explore the role of KRAS in vivo using the Rosetta imaging pipeline. Without this technology and the expertise of our colleagues at NPL, we'd never have visualised glutamine in the tissue and understood its role in KRAS-mutant tumour metabolism.

Chelsea: Having close working collaborations with cancer biologists, data scientists, chemists and physicists within our Cancer Grand Challenges team is incredibly beneficial, bringing unique perspectives to the complex datasets we produce. The mix of expertise enhances the interpretation of our results and means we gain a better understanding of our MSI data in relation to biological impact – which is absolutely crucial when forming hypotheses and conclusions. This paper illustrates the high impact science that can be achieved through highly multidisciplinary collaborations.

How have you found being part of a Cancer Grand Challenges team?

Chelsea: Being such a large, multidisciplinary team, there was definitely a learning curve at first, learning each other’s models, analytical techniques and methods of data processing. We’ve learnt how to present data to each other to facilitate understanding and discussion – I find it very rewarding, both intellectually and personally. I enjoy engaging with experts from a variety of areas, learning from them while sharing my passion for MSI. What an amazing experience!

Rory: Rewarding, challenging, exciting, frustrating, confusing… and a wonderful opportunity to be part of a unique and internationally leading community. I believe the most important work is done in multidisciplinary scenarios, so I really value the opportunity to work in this setting.

Owen: What’s been really valuable has been the ability to embed our different disciplines together in the same team – students, postdocs and group leaders alike. We probably did spend the first year or so of the award speaking slightly different scientific languages, learning what the technology can really do, working out how to employ it in the best way for the biology. But Cancer Grand Challenges has let us spend the time to really understand each other and we now work as a very strong partnership.