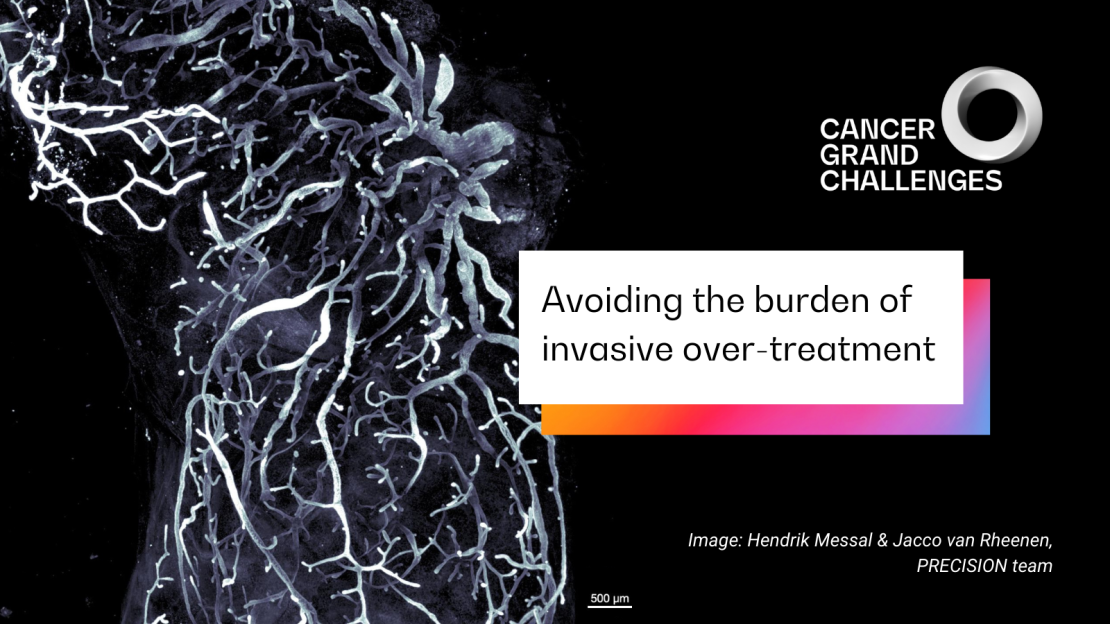 Non-invasive breast carcinomas have long been assumed to be the precursors of any invasive cancers that follow. But new findings, from the team taking on our Lethal vs Non-lethal challenge, indicate that around 1 in 5 of these subsequent cancers are new primary tumours unrelated to the initial lesion.

This understanding could cause a paradigm shift in how ductal carcinoma is managed in the clinic, helping to reduce the burden of overtreatment.

In ductal carcinoma in situ (DCIS), abnormal but non-invasive cells are present in the breast milk ducts. Although DCIS remains harmless in most people, some people will develop ipsilateral (same-breast) invasive breast cancer (IBC). Because predicting who will or will not develop IBC is impossible, treatment is generally recommended for all cases.

Each year, thousands of people with DCIS undergo surgery, radiation and hormone therapy, which may not be necessary and may be accompanied by unnecessary stress, adverse effects and anxiety. To avoid unnecessary treatment, a deeper understanding of DCIS biology is urgently needed, and predictive markers of progression must be identified. The Cancer Grand Challenges PRECISION team is taking on this pressing challenge.

Major findings from the team challenge the current dogma in which almost all cases of IBC after DCIS are believed to be related to the initial lesion and due to lesion progression. The study, in Nature Genetics, shows that as many as 1 in 5 subsequent IBCs are unrelated to the initial DCIS and instead develop as second primary tumours.

“Our results are surprising, and I think some people might find it hard to believe that such a large proportion of subsequent IBCs are completely unrelated to the original DCIS,” says team lead Jelle Wesseling, Netherlands Cancer Institute. “If we had only used bulk sequencing on a few samples, I think that would be a valid point. But our findings are backed up by such a breadth and depth of quality information.”

The findings from the study may change clinical paradigms. “Our study indicates we can no longer consider DCIS solely as a precursor but rather also a risk factor for the development of a second invasive breast cancer later on in life,” says Elinor Sawyer (King’s College London), joint senior author of the study. “This important new information about DCIS biology and behaviour could change the way we manage and treat the condition in the clinic.” Find out more about these findings in this explainer video.

Historically, research in the progression of DCIS to IBC has been logistically challenging because the proportion of people with DCIS who later develop IBC is relatively small, and recurrent IBC often occurs long after the initial DCIS diagnosis. PRECISION has addressed this challenge by analysing data and samples from well-annotated cohorts of people with DCIS throughout the UK, US and Netherlands, which are the largest of their kind in the world.

"Through Cancer Grand Challenges, we have access to three huge cohorts of people who were diagnosed with DCIS and later developed IBC,” describes Esther Lips (Netherlands Cancer Institute), joint first author of the study. “We can match patient samples to follow up clinical information long after their DCIS diagnosis.”

This rich source of data has been central to the team’s paradigm-shifting insights, by allowing them to integrate clinical, pathological and epidemiological data, in addition to multiple layers of genomic, exomic and mutational analyses, even at the single-cell level. “This study is the culmination of a real tour de force,” Jelle says. “It’s wonderful that this full team effort could have real-world implications for the way we manage DCIS in the clinic.”

For oncologist Elinor, the clinical goal is decreasing the use of radiotherapy, which is often used to reduce the risk of local recurrence and progression. “If the invasive cancer is unrelated to the DCIS, radiation won’t help to prevent it, and the patient will receive no benefit,” she says. “Perhaps we should explore whether endocrine therapy could provide a more effective preventative tool in these people – to treat their DCIS and reduce the risk of both local recurrence and a new primary cancer.”

Meanwhile, for pathologist Jelle, the goal is “understanding when it's safe to consider a watch-and-wait approach”. He continues, “If we could understand the risk of a particular DCIS lesion in a particular individual, we could learn when it’s safe to undergo a moratorium on treatment and opt instead for active surveillance.”

The role of the microenvironment in individual risk

A remaining question is why 1 in 5 people with IBC after a DCIS diagnosis can develop two clonally unrelated cancers in the same breast. Further research is ongoing. "But we can speculate,” says Elinor.

One possibility might be that inherited genetic changes may influence whether people are more likely to develop a recurrence or a new cancer after DCIS. To probe this possibility, her team is analysing a vast data bank of germline genetic information from people with DCIS, collected through ICICLE, a cohort study funded by Cancer Research UK.

Alternatively, the breast microenvironment may permit the emergence of a second, unrelated primary tumour, in a phenomenon termed the field cancerisation effect. According to this hypothesis, certain factors in the surrounding tissue – perhaps immune cells, stromal cells or the tissue architecture – provide an environment where clones of cells with pro-tumorigenic mutations thrive, resulting in large fields of cells that are more likely to develop into a tumour. This would make some people more prone to breast tissue tumorigenesis than the general population.

Answering this question by developing novel models and optimising existing models of DCIS is a major component of the team’s ambitious programme, which is being spearheaded by co-investigators Jos Jonkers, Jacco van Rheenen (both Netherlands Cancer Institute) and Feriba Behbod (University of Kansas Medical Center). Many of these models have now been shown to be reliable, realistic tools for studying the progression of human DCIS. For example, the Mouse INtraDuctal (MIND) model – in which patients’ DCIS epithelial cells are injected into mouse mammary glands and observed as they progress naturally – has recently been reported to accurately mimic all histological subtypes of human DCIS.

The team is now able to visualise the entire mammary gland in in vivo models such as MIND, as enabled by the development of a workflow incorporating 3D imaging and intravital microscopy – a powerful tool for imaging biological processes in live animals. This technology is already revealing new information about the growth patterns and ductal architecture in indolent and invasive disease.

Avoiding the burden of unnecessary treatment

“As doctors, we all train to do ‘something’ to help our patients. Taking a step safely back and choosing not to treat someone is really hard, so DCIS is almost always treated,” says Jelle. “Our findings published to date, and all the data we’ve collected through Cancer Grand Challenges so far, are all leading us closer to answering the question we posed at the start of the challenge: when is cancer not really cancer? Collectively, our work could ultimately save thousands of women the burden of invasive over-treatment.”

The PRECISION team is funded by Cancer Research UK and the Dutch Cancer Society.