A step closer to distinguishing harmless from invasive breast lesions 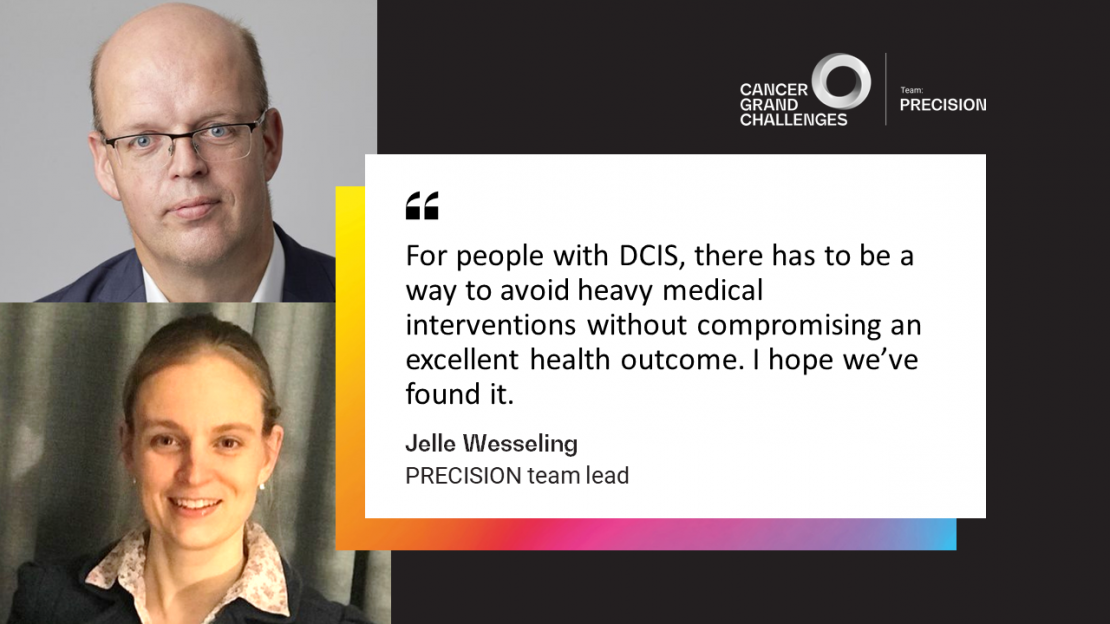 New findings from our PRECISION team define clinical criteria that may distinguish between patients with harmless breast carcinoma from those with a higher risk of invasive cancer.

Although breast cancer screening has been crucial in diagnosing more people in early disease stages, when treatment is more than three times more likely to be successful, it has also greatly increased the diagnosis of ductal carcinoma in situ (DCIS). DCIS was rarely diagnosed before the era of screening but now accounts for approximately one-quarter of the 2.3 million breast cancers diagnosed each year. In most people, the lesions will remain harmless, but some people will develop ipsilateral invasive breast cancer (IBC).

Because of the inability to identify which people with DCIS will develop IBC, treatment is recommended for all cases. Each year, many thousands of people undergo needless surgery, radiation and hormone therapy, accompanied by unnecessary stress, adverse effects and anxiety. To avoid overdiagnosis and overtreatment of DCIS, there is an urgent need for prognostic markers to distinguish between benign and invasive DCIS.

Meeting this need is the central goal of the Cancer Grand Challenges PRECISION team, which is working to identify the features and molecular players involved in the progression of DCIS to IBC, and to develop tools that can distinguish harmless from potentially hazardous DCIS and ultimately prevent overtreatment. The team uses a multidisciplinary approach to solve the highly complex puzzle of DCIS progression.

The study’s lead author, Mathilde Almekinders, then a PhD student on the PRECISION team, had the idea of studying the adipocytes surrounding the breast ducts. “Despite being able to influence the behaviour of their neighbouring cells, adipocytes are not typically the focus of breast cancer studies,” Mathilde explains. “But fat tissue is a major component of the breast. It’s not just a storage organ – it has many functions, including in the endocrine and immune systems.”

As reported in npj Breast Cancer, the team used digital pathology to analyse breast adipocyte features in a nested case-control study of patients diagnosed with primary DCIS who had different health outcomes. A combination of both large breast adipocytes and high expression of the COX-2 protein, rather than smaller adipocytes and low COX-2 expression, was associated with a 12-fold-higher risk of subsequent invasive IBC.

“Findings like these bring us closer to solving our Cancer Grand Challenge and our vision of understanding harmless versus hazardous disease,” says Jelle Wesseling, PRECISION team lead based at the Netherlands Cancer Institute. Next, the team will cross-validate these findings in cohorts, including their own and those from the STORMing Cancer team.

Integrating more pieces of the puzzle

A major focus of the PRECISION team has been uncovering the poorly understood, complex biology of DCIS by developing new models to uncover the mechanisms associating DCIS and cancer risk. Adipocyte size and COX-2 expression are just one piece of the complex DCIS puzzle. The team has also demonstrated that expression of the biomarkers HER2 and ER can help pathologists classify DCIS grade more accurately. In addition, the team is developing and validating artificial-intelligence algorithms to assess the calcifications detected in mammography screens and determine which are associated with low-risk versus high-risk DCIS.

The team’s efforts collectively represent a major step towards solving the challenge of DCIS overtreatment. The findings may eventually help doctors provide science-based recommendations, and empower patients and clinicians to make informed decisions regarding care.

“For people with DCIS, there has to be a way to avoid such heavy medical interventions without compromising on an excellent health outcome,” says Jelle. “We’re moving closer to defining the very specific criteria that could change the way we treat DCIS in the clinic.”