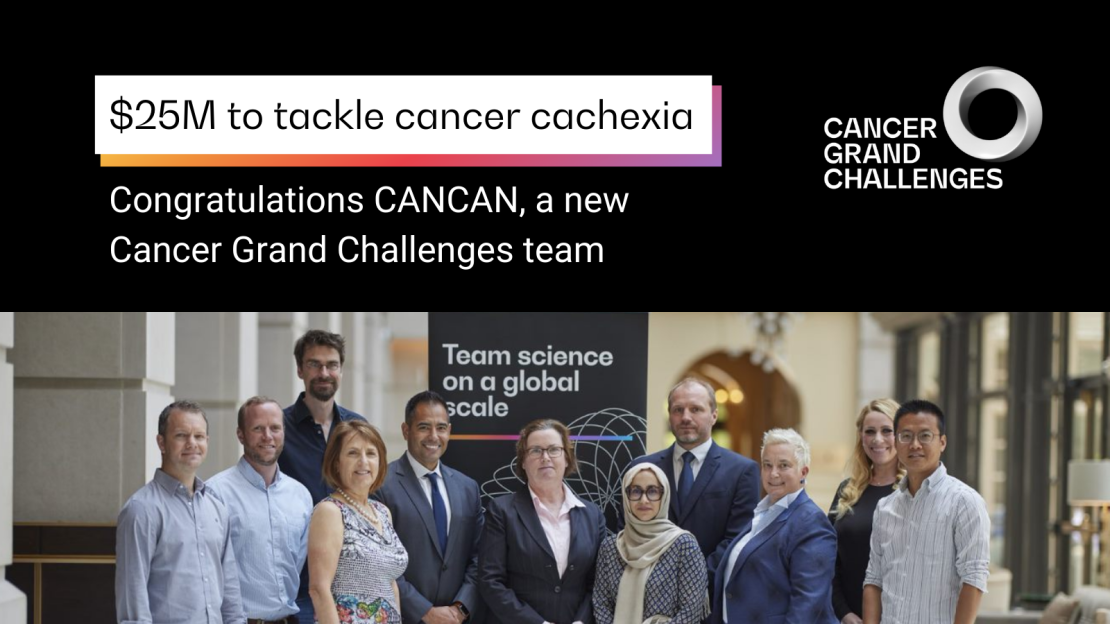 On 16 June 2022, we announced four new Cancer Grand Challenges teams taking on some of the toughest challenges in cancer research.

Here, meet the CANCAN team receiving $25m to take on the Cachexia challenge.

Many patients with advanced cancer experience cachexia, a debilitating wasting syndrome characterised by extensive weight loss from both skeletal muscle and fatty tissue, which can’t be reversed with nutritional therapy. Cachexia is often accompanied by fatigue, broad organ and tissue dysfunction, and a greatly diminished quality of life. In addition, cachexia limits patients’ ability to receive systemic cancer therapies and imparts a poor prognosis.

Despite these major clinical implications, relatively little is known about cachexia, and effective therapies are lacking. Although cachexia’s major manifestation is muscular atrophy, the condition is now being understood to be a systemic phenomenon arising from a complex set of interactions between tumours and patients, through metabolism and the immune, endocrine and central nervous systems.

A deep understanding of the mechanisms causing this syndrome would enable the development of novel interventions that could improve treatment response, quality of life and ultimately survival. The Cachexia Cancer Grand Challenge invited teams to build on recent advances to expand the mechanistic understanding of cachexia, fatigue and associated poor health status, and to build a platform to develop therapeutic approaches to reversing this debilitating condition.

We met with the team to learn more about their programme.

Eileen: Although cachexia research over recent decades has been fruitful, it’s been incremental and has not yet identified any upstream mediators or generated effective therapies. We’ve assembled a team with diverse and complementary expertise, which we believe can advance the field from this nascent, descriptive stage and find novel ways to remedy the condition.

Tobias: As a medical oncologist, I’ve always been very disappointed that we have so little to offer patients with cachexia in the clinic, and that the condition remains so poorly understood. A novel therapy would improve treatment response, increase quality of life and prolong survival.

Marcus: I’ve always been very interested in how different organs communicate to regulate body weight. Initially, I was interested in metabolic disease, such as diabetes, but I’m now invested in understanding how a tumour can dysregulate the entire endocrine system and drive the wasting syndrome in cachexia. We hypothesise that cancer cachexia results from a systemic metabolic imbalance driven by tumour-intrinsic factors and neuroendocrine dysregulation.

Eileen: The timing is perfect. We’re learning more about the metabolic dysregulation at the centre of cancer cachexia, and we have a chance to connect with other researchers and combine our expertise to make a bigger impact. Cancer cachexia is a complex problem that can be tackled only by assembling a critical mass of researchers and oncologists with diverse expertise.

Why the Cancer Grand Challenges approach?

Marcus: A strength of our team is our diversity of experience, career stage and expertise. To bring all these people together is incredibly exciting and is how I envisaged my career as a physician scientist. This is an opportunity to devote substantial time and resources to the problem of cachexia. We’ve packed many ideas into our proposal, and we really think it could revolutionise the field.

Eileen: We’re excited to join the community of teams already funded through Cancer Grand Challenges and to learn from how they’ve overcome obstacles that we might face.

Tobias: Cachexia is an interconnected phenomenon that is spread across multiple systems and is beyond the reach of any individual researcher or discipline. Through Cancer Grand Challenges, we’re tackling this problem through team science, building a virtual institute of researchers from a wide range of fields, and aligning our efforts to overcome barriers that typically slow progress and therapeutic development. It’s wonderful to have this opportunity to work on a topic we’re all so passionate about.

Find out more about the CANCAN team and all newly funded teams.

Image: members of the CANCAN team at the Cancer Grand Challenges Summit 2022.